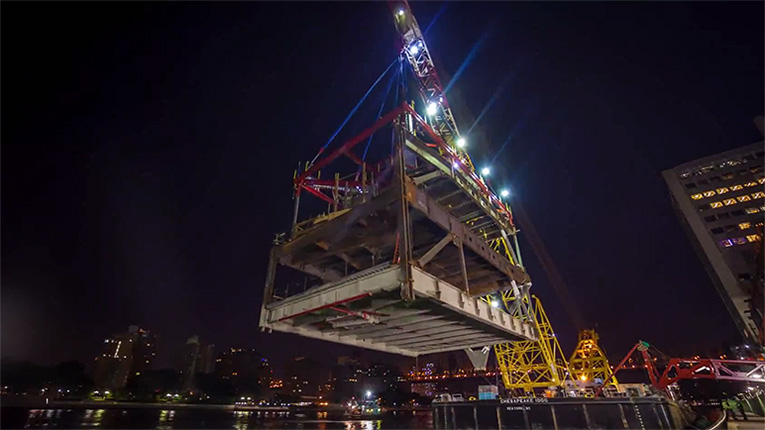 A two-minute video shows the first of 19 prefabricated modules of the Rockefeller University expansion’s structural steel skeleton lifted into place over Franklin D. Roosevelt Drive in New York City via one of the largest barge-mounted cranes on the East Coast.

The lift took place in June and is the first of 19 being conducted throughout the summer during overnight hours. To help minimize disruption for neighbors and commuters on the FDR Drive, the steel superstructure has been prefabricated off-site as a series of interlocking modules. Each of these modules, some of which weigh as much as 750 tons, are being transported from Keasbey, N.J., to the Upper East Side via barge, hoisted into place, then bolted to support columns that have already been constructed along both sides of FDR. The project is using a total of 5,000 tons of structural steel, fabricated by Banker Steel (an AISC member/certified fabricator) and erected by NYC Constructors, which was recently acquired by Banker Steel.

“Everything about how this project is being conducted is designed to minimize the impact in the community and maximize safety and efficiency,” says George Candler, Rockefeller’s associate vice president of planning and construction. “By doing as much work as we can off-site, we have limited the number of closures needed to just nineteen.”

The $500 million extension project, the Stavros Niarchos Foundation–David Rockefeller River Campus, is due to be completed in spring 2019 and will add 160,000 sq. ft of space to the school, including modern, modular laboratories to replace the research university’s aging facilities. It will also include a green, landscaped roof that will add two acres to the university’s existing 14-acre campus. The two-story, three-block-long Marie-Josée and Henry R. Kravis Research Building will be the centerpiece of the project. For more about the project, visit http://rivercampus.rockefeller.edu.